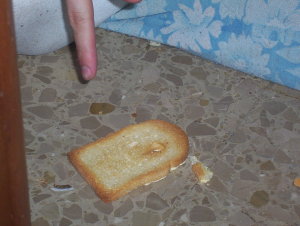 I’m busy setting up and extensive suite of Rake tasks to manage the building, configuration, customization and deployment of Gentoo Linux onto USB drives.

We’re busy migrating all our servers (new and current) onto USB for various reasons, which I don’t want to elude to just yet. If you think I’m crazy, EngineYard does the same and I’m sure plenty of other providers do the same thing too…

I haven’t really used Rake extensively in the past, but I know how powerful it is and it was a perfect fit for the tasks at hand. Trying to remember a complicated set of command line parameters and the perfect sequence in which they should run is not a joke. Rake to the rescue.

I did pickup on some non-obvious Rake details, well non-obvious to me at least, and thought I’d share them here.

Rake changes the current working directory to that of the Rakefile before running tasks. This might sound obvious, but I discovered it by mistake.

Now edit Rakefile to have this:

You should see the top level directory get outputted to the console no matter how deep you go down the rabbit hole:

I’ve always noticed the directory getting printed out, but never realized the significance of this since I’m always in the same directory where the Rakefile resides…

Farrel Lifson had this eye opener on arguments for tasks, and I used it happily until I refactored a huge tasks into several smaller ones. Below is my failed test case:

Running it yielded this disappointing output:

And then as Murphy would have it, after I’ve changed the tasks back to using standard ENV style arguments, I mistyped the initial failed code like this:

And got these results:

So there is some hope, but managing arguments in this style for the entire dependency tree would be a nightmare. Anyone have some good suggestions on the latter we can pass on to the Rake team for inclusion?